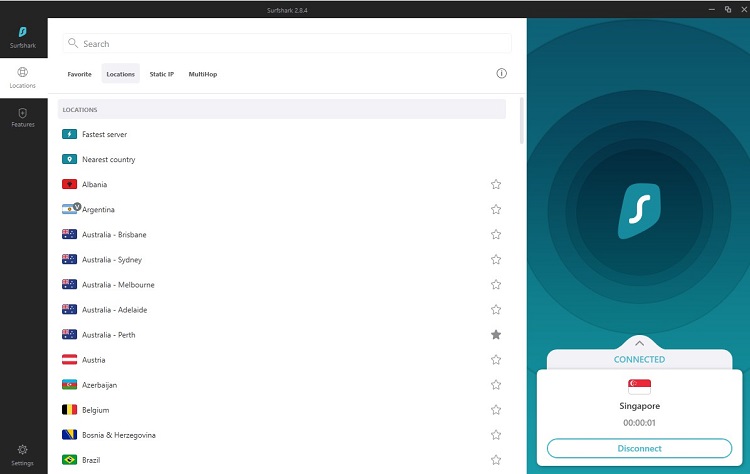 Given how many devices each household is likely to have today, services have begun supporting multiple licenses per subscription. However, many are still leery about covering too many devices in case users abuse the privilege.

This limitation can be really annoying, especially for services we need on multiple devices – like Virtual Private Networks (VPNs). If you want a VPN that blows these device limits out of the water, then Surfshark is your best bet.

Statistics show that most countries have an average device-per household figure of between seven to ten (See actual numbers here). Given that figure, most VPNs won’t be able to cover everything at once, which is certainly an annoyance.

Let’s remove that annoyance, shall we?

Although Surfshark is relatively new to the VPN market, it is making waves with its stellar all-around VPN coverage. In fact, not only is Surfshark the VPN to go to if you only need a single connection, it is the VPN you must have especially for multiple device connections.

Here are some of the things that make Surfshark such a great deal:

Surfshark is one of the very few reputable VPNs (if not the only one) that allows unlimited simultaneous connections. This means that you can connect as many compatible devices as you want under one account.

This not only makes it much easier for you, but it also helps heaps with cost savings. So, you can rest easy and connect as many devices as you want with no worries of digging a hole in your pocket.

2. It Keeps Data Safe and Private

Surfshark particularly shines in its promise of keeping you safe and private. Multiple features combine to safeguard your browsing experience and ensure that cybercriminals and businesses alike won’t get a hold of you.

Based in the privacy-friendly British Virgin Islands, Surfshark guarantees a strict no-logs policy. This is further confirmed by an independent security audit which confirmed that no security issues were found. Surshark does have a spotless track record of handling customer data, which is impressive. In short, your online activity is totally anonymous.

On top of having a secure handshake with VPN servers, Surfshark employs top-notch encryption for the data transmitted through the VPN tunnel. It uses 256-bit encryption, which is as good as it gets.

This is in conjunction with an SHA-512 authentication hash and 2048-bit DHE-RSA key exchange. As a result, you’ll get a secure, tightly encrypted tunnel that allows you to hide your traffic from prying eyes.

Surfshark leverages several key protocols, namely the tried and tested OpenVPN as well as IKEv2. The former is the de-facto standard when it comes to high speeds and security whereas the latter is more suited for mobile networks.

A new addition to its protocol options is WireGuard; a lightweight, open-source protocol that is becoming more and more popular, as it gives greater speeds, excellent security, and compatibility with all major Operating Systems (OS).

The inclusion of a kill switch function that terminates the internet connection automatically in the event you encounter connection issues helps ensure you are safe and will stay safe at all times. Also, it offers you protection against leaks; IP, DNS, and WebRTC leaks were tested and found to be negative.

3. Available on a Variety of Platforms

It is also available as a browser plugin for Chrome and Firefox. As you can see, Surfshark works with almost any device in existence which makes connecting to your various devices easy and with no hassles.

Additionally, you may install Surfshark on routers. However, bear in mind that router-installed VPN services can be considerably slower. This is due to routers having to take on more work to perform the encryption and also that most routers are known to be weak in this area.

Click the MultiHop and select the pair of VPN servers to route your traffic.

This is a double VPN feature where you can choose to route through two VPN servers consecutively instead of the usual one server. Using the multi-hop feature increases the anonymity factor for greater peace of mind.

Speed tests were done on Surfshark and the overall speed performance was found to be good and up to par with most of the top service providers in the VPN business. Almost all locations tested with Surfshark showed that although it did not register the fastest speeds around town, it did provide very consistent speeds which were more than satisfactory.

This in fact is a stronger telling sign of Surfshark’s reliability as compared to one that only has a couple of locations with awesome speeds but the rest are unusable.

Surfshark has over 3200 servers in 65 countries across Europe, the Americas, Middle East, Africa, and the Asia Pacific region. This is impressive for a newcomer. Their servers are all P2P-friendly. This great coverage area simply means you’ll have no problems accessing anything you want anywhere in the world.

Most would use a VPN to access geo-blocked content and this is especially useful when it comes to media streaming; Netflix, BBC iPlayer, Amazon Prime Video, etc. Fans of Netflix will relate heavily to this.

Most VPNs except a handful tend to disappoint with either bad connections or serving you with much dreaded ‘PROXY DETECTED’ messages. Surfshark doesn’t do any of that and ensures you get the smoothest Netflix experience for many countries. It also unblocks lots of other content.

While most VPN providers do provide you with many extra nifty features built-in, Surfshark excels in that it gives you added features that complement its primary purpose:

The feature allows you to decide which traffic bypasses the VPN service and which doesn’t. This is especially useful when you have some applications or sites that encounter problems with VPNs. The Whitelister feature enables you to configure right down to the URL or app that will bypass the VPN service altogether.

This is especially useful for sites that for some reason, have blocked VPN traffic. Aka server obfuscation, this camouflage mode renders your connection to appear more like regular internet traffic instead of VPN traffic, thus, letting you in.

If you happen to be in a restrictive area such as China, you’ll find that using a regular VPN may not be sufficient to bypass all the extremely high supervisory measures put in place. All you need to do is turn on Surfshark’s No Borders Mode and all is good to go.

Additionally, Surfshark gives you the CleanWeb option to help block ads and trackers.

Surfshark’s pricing seriously knocks the ball out of the park. If you opt for the 24 monthly plan, you’ll only have to pay $2.49/month! This price for all the goodies as listed above is absolutely something to rave about. For a VPN service that offers such consistent performance along with so many solid features, this is absolutely a steal!

As you can see, there are lots of reasons to love Surfshark. If we include those unlimited device connections, it really is a deal that’s hard to beat.  Factor in the consistent speeds on all its servers and formidable array of features and we have a real winner on our hands.

How a VPN can be usefulBest VPN for Hong KongHow to hide or change your IP addressIs it legal to use VPN?Which VPN works in China?