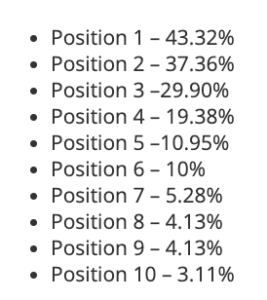 Remember when Google finagled with their system to make it so that you couldn’t double dip on Featured Snippets/Instant Answers (Get a Featured Snippet and rank on page 1 in 10 blue links). Well, there are a lot of people who have been skeptical about the value of this particular search feature in this new world.

Were we all fooled by Google into giving them free content for SERPs (Featured Snippets) that are great for their user and their product but bad for our clients?

It wouldn’t be the first time Google has gotten us as an industry, and it won’t be the last.

Let’s dive into this with a specific example, and if people are interested enough (or want to fight me in the mentions) then I may start looking at other Featured Snippets for other clients and post about their relative worth with their site specific CTR curve.

Speaking of CTR curves, lots of CTR studies out there, we are just going to use this one from Ignite Visibility for ease of reference so we are using the same numbers.

Another example from a more niche query, same site, over a period where they are only holding the Featured Snippet

Dan, this is 8 searches, who cares?

Well, first of all, this is a B2B SaaS company, so if you don’t care about low or no volume search queries you should. 8 searches in a week for a highly qualified term is pretty alright.

Third, a thought experiment. Let’s say this client converts SEO traffic -> $$$ at a 1% rate and the value of a closed deal averages out at $50,000. That puts the value of a click at $500 (for projections etc). A 2 click difference between over 100 low search volume, high intent, queries like this one is a minimum $100,000 difference. The impact of trading a Featured Snippet for Position #2 in the first example could net as much as $15,000 on a single low search volume, highly qualified keyword. So Bob’s Your Uncle on whatever the ceiling can be in terms of revenue. Seems like a potential 7-8 figure win if you are right. A lot more for a site/vertical with more upside and million dollar queries.

Obviously your mileage may vary as click-thru rate curves vary by industry and site. There may also be an elusive branding win on the table here, but will likely leave it to someone else to quantify that.

So who is going to publish a guide on how to trade a Featured Snippet for position 1 or 2?