Performance as a Ranking Factor: The State of the Web and Core Web Vitals [Part 3] 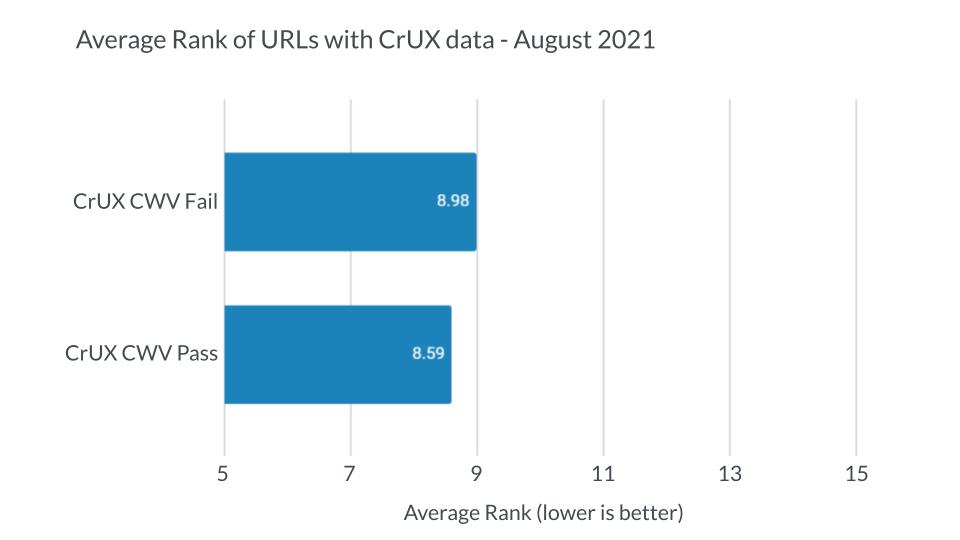 In part one of this series, we talked about how Google and the web in general were not really ready for the Page Experience Update — Google’s CrUX data covered too few websites, the vast majority of which were not hitting the required thresholds. That was why, I suggested, the update had been so delayed and watered down.

In part two, we talked about the metrics themselves — their flimsiness, their arbitrariness, their openness to manipulation. This, too, I suggested, might be holding Google back.

However, the proof is in the pudding. Are Core Web Vitals, taken individually or as a whole, correlated with rankings? If so, is that any more true than it was before the Page Experience Update? In this third and final post of this series, we’ll see what the data tells us about the relationship between Core Web Vitals metrics and organic ranking performance.

This is, at most, a correlation study. There are many mechanisms by which something can be correlated with rankings without having directly influenced rankings.

We’ll talk through potential implications as we go, but please, proceed with caution!

Performance of passing vs. failing URLs

To start with, I decided to look only at the URLs that had CrUX data in the first place. You may remember from part two that, at the time of the update rolling out in August this year, that was some 38.3% of URLs. This is taken from the top 20 results for 10,000 MozCast keywords, across mobile and desktop device types.

We see a solid 0.39 ranking position lead here for the URLs that pass all three CWV thresholds, above those that fail at least one.

Does that mean this is a ranking factor?

On the face of it, the above data looks very promising for CWV as a ranking factor. However, it’s worth tempering our excitement a bit.

Let’s have a look at the same data but from May, before the Page Experience update rolled out:

We can notice a few things here:

The average rank of URLs with CrUX data was generally worse in August than in May. This is to be expected, as more URLs had CrUX data by August, so it had worked its way further down the rankings.

URLs which pass the CWV thresholds already had a ranking difference even before the update. This suggests that perhaps URLs which pass the test were already better in other ways that already counted towards rankings (for example, perhaps rankings were rewarding URLs with a good user experience).

The difference between URLs which passed the thresholds and those which did not has grown from 0.38 in May to 0.39 in August — although this is probably very easily within the margin of error.

It’s also interesting to contrast with a performance metric which was not part of the Page Experience update: Speed Index, as reported in Lighthouse lab results.

We can see in this chart that Speed Index, despite not being an explicit ranking factor, has a modest improvement in average rank associated with this percentile breakdown (0.17, vs. 0.39 for passing all three CWV thresholds). This doesn’t mean that Speed Index is a ranking factor, it just means that these things can be related in more complex ways.

(If you’re a mathematics nerd like me and you’ve just noticed the weighted average rank of the two groups is not the same, that’s because there are a tiny number of URLs for which I was able to obtain CrUX data, but not lab data, due to server errors, etc.)

So did anything happen?

The real impact was felt for URLs that failed all three tests. Although these URLs often started out ranking best of all (probably because they disproportionately represent some important, household name brands) they’ve taken a hit with the update. These URLs have had a 1.15 position ranking drop, compared to around 0.2 for URLs with CrUX data taken as a whole.

This, as I mentioned in part one, is different to what Google set out to do. Back in the original FAQs for the update in 2020, Google said:

“If a page hits the recommended targets for all three metrics, it passes the web vitals assessment… The page experience ranking impact will be the same for all pages that are in the good range for all Core Web Vitals, irrespective of their individual Core Web Vitals scores.”

Wait, so all I need to do is pass one metric?

Well, no, that’s not quite the attitude. There are still lots of other reasons to want to pass all three, and more importantly, to have a generally good page experience. Google is only going to be looking for more ways to augment and ramp up these factors over time.

Also, the rest of SEO still counts. Check out the rather more pronounced difference associated with Page Authority, for example:

Good luck out there 🙂

Ready to see if your site’s pages are passing one CWV or none? Head over to Moz Pro and check out the Performance Metrics beta within our Site Crawl toolset.